Nestled in the busy suburb of Damansara Jaya is the Atria Shopping Centre {Atria}. I will not go into historical details about Atria as you can read bits and pieces about it here... Instead, I would to share with you some of my   fondest memories that have all taken place in Atria.

I remember being about 4 years old and seeing a gigantic glass container which held 100s of jelly beans in different glorious colours. I remember asking for them and  marveling at the colours but I can't remember if I managed to get my parents to buy me some. I remember though that about that age, my parents got me a Barbie bathtub and four-poster bed complete with silk sheets and pretty pink comforter with lace {which has since made me want one!}

I remember the best toy store around in Parkson {the anchor tenant of Atria}. The sales were kick-ass and I would beg my parents to bring me there to buy Barbie stuff. I had a hot dog stand, a mini Barbie car that doubled up as a pencil case, heaps of Barbies and Polly Pockets.

There was also my Sweet Valley Twins phase. I would get my parents to bring me to Times in Parkson which had new editions of Sweet Valley Twins out every Tuesday or was it Thursday... hmmm... Nevertheless, it was a thrill to finally have the RM7.90 book in my hand and on my shelf.

There was also the Bob Dog stuff, the Looney Toons stuff, several coin machine type things and an awesome supermarket where we had our first mini round hash browns {bought by weight}, frozen waffles and ice cream cake! I remember my mum also buying us bacon and Marigold Peel Fresh from there. Strangely there was a little cafe with a very simple deco that was tucked beside the supermarket. I can't recall what it was called but I remember white walls and dark brown chairs for some reason. That cafe closed down pretty quickly though.

Then I remember being in primary school and hanging out with my friends at Kentucky Fried Chicken. That particular KFC had a juke box and I remember playing several songs on the juke box every other Saturday after our extracurricular activities at school. Some of them were 'Summer Time' by Shaggy, 'Can't Help Falling In Love' and 'Red Red Wine' by UB40 and on certain occasions 'Oh Carolina', 'I Just Can't Stop Loving You' and other awesome songs. After eating a colonel burger, which was what I could afford then, we would walk around the shopping complex and I will spend my weekly allowance on ribbons, pretty Sanrio or Forever Friends knick-knacks and stationery from Kalms, Barbie, Archie or Harvey comics and of course on tokens for the little arcade 'Wy Wy Wonderspace'.

Later on, when new shopping centres opened, especially One Utama {which continues to grow and evolve}, not many people visited Atria. People {myself included}, wanted more brands, more modern things... not Atria which was so dull in comparison... and look at me now... missing a landmark... missing a shopping centre! But really there are just too many memories that I have in Atria.

Atria was also the place where I nearly got caught with 3 other girlfriends for shoplifting... Yes, those were the days when one was impressionable and could be easily swayed to do crazy things like this. My parents needless to say freaked out and gave me a good guilt trip along the lines of 'why did you have to steal? did we not provide you with enough?'. This of course made me feel even more of a shit, so I cried and ran up to my room and hid. Everything was forgotten thereafter but I think my folks took more notice of what I was doing and who I was hanging out with thereafter. Of the 3 girlfriends that were involved in this life altering event, 2 of them are still my good friends and it is just so good to see how far we have come since then.

I also remember eating my first frozen ice cream with fruit. You could choose the fruit you wanted and they would blend it with ice cream or yogurt for you. I usually opted for ice cream with blueberries, raspberries and lychee to sweeten it up. That stall also sold corn in a cup ~ my first. I was hooked!

There was also an air plant /bonsai shop that my nieces, nephews and cousins visited. At one time there was a craze to get the little coloured animals, bridges and men with long beards, floppy hats and fishing rods to decorate your air plant / bonsai. I remember buying a packet of green frogs... I wonder where they are or what became of them since I had neither an air plant or a bonsai plant *snickers snickers*

After my childhood days, after my primary school days, after life altering events, Atria became the place you went to to get quick groceries or toiletries, KFC, discounted books or computer software {I bought my first PC game in a floppy disk from Atria}. Later when B began courting me, he would bring me to Atria for breakfast while he washed his car in Atria {there was a little car wash company in the Atria basement}. When we were bored on weekends, B and I would also browse through the discounted books and a strange shop which sold all manner of items, from card games to batteries to ladles to hangers and etc. There were always some gems waiting to be uncovered! *huhuhuhu* We would also have a quick KFC from Atria or Nandos's... and now... 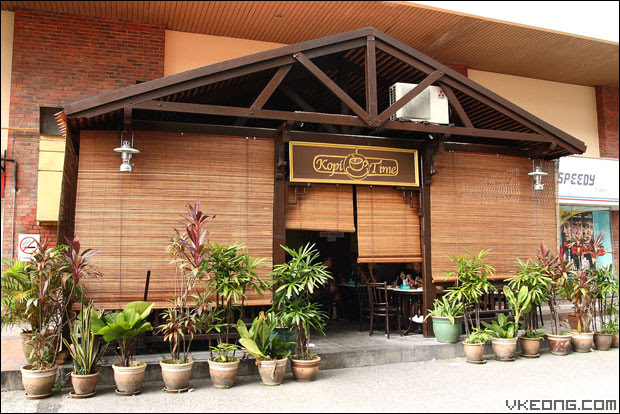 Now after so many years worth of memories, Atria Shopping Centre is closing down. In it's place will be some high rise commercial / residential building *sniff* I am so glad that B took the trouble to have a last visit to Atria with me. Another reason why I love him *smiles*  As we walked around Atria, we pointed out familiar shops {now empty shells} and shared snippets of memories that we had of Atria. We rode the bubble lifts up and down and even spoke to the security guard there. Mr Wong has been working in Atria for 11 years. He was sad that he was out of a job but he says he is blessed as he is 60 and should retire. He thanked B and I for coming and asked God to bless us. I also told Mr Wong that I had so many memories of Atria as I had been visiting since I was a kid. He motioned to another guy beside him and said that that guy was also reminiscing about the good ole' days.

Anyways, there is really so much to say but at the end of the day, Atria will always live on in our hearts and in our memories. I bid thee adieu Atria Shopping Centre. It's been great visiting you.


To view photos of Atria, do visit my Facebook Album titled 'Atria: The Last Visit' *enjoy*
{photos will be uploaded one day soon I hope}.
Dreamed up by *Dream Weaver* at 11:44:00 PM
This post is about: Atria Shopping Centre, Forever Friends, Kalms, Sanrio, Thoughts and Musings