This Morning...
I met up with the ScrapbookLady, and hopefully she buys my idea.
*says a little pray and crosses fingers and toes*
~*~*~*~
After that...
I blogged from the first time in Starbucks, The Curve.
It was an interesting first.
~*~*~*~
In the Afternoon...
Met up with TheSexyDave and had lunch at La Gourmet House.
I had to mutilate my lunch of Duck Bruschetta to get them idiot onions out of
my food *note to self: if ordering food in the future,
make sure they dont have chopped onions!*
~*~*~*~
After Lunch...
I went to Borders and I bought three new books
(which I have to hide from my mother and simultaneously find space for!)
*GAH! There goes more mullah!*
Thankfully fter some persuation... Sunshine will be sponsoring one,
so I feel a little better.
The books I bought are:
UGLY - Constance Briscoe
The Pact - Jodi Picoult
My Best Friend's Girl - Dorothy Koomson
~*~*~*~
Later that Day...
I went online and asked someone (the slimebucket!) for help regarding my jobhunt
and all I had in return was freaking obnoxious answers!
*grumbles grumbles*
I hate it when people look down on me and make me feel small.
They should really try to examine themseleves a little closer and
get their head out of their arseholes!
~*~*~*~
Later that Night...
I went for bowling and it was one of the shittiest games I have ever played.
*sobs sobs* Doesn't help when you realise that Malaysians are so bloody
annoyingly complacent. Everything is okay if it works... it doesn't
really matter if its not perfect, as long as it works its ok!
No wonder with this kind of attitude we are still like a developing country...
*grumbles grumbles*
~*~*~*~
Before Bedtime...
I feel crappy... must be the milo and keropok lekor I had.
I guess overall it was a productive day...
Tomorrow will be better *smiles*
Dreamed up by *Dream Weaver* at 5:43:00 PM 1 whispers 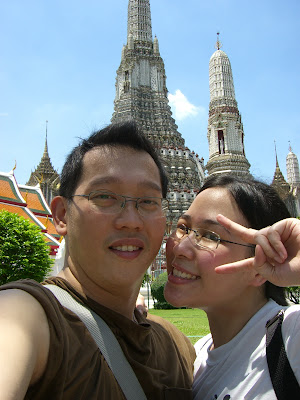 Its been a week since Sunshine and I have been back from Bang.Kok...
I can't believe how time flies... (its really freaky)
This pic of Sunshine and me was taken in Wat Arun
before we were shown some "Thai Hospitality"...
I remember being really grouchy before this pic - Thai Photo #1
(malas to crop!) was taken because I had developed a really bad rash
due to the horrid heat. The smile in the pic was one of relief knowing that I was on
my way to getting a bottle of chilled mandarin orange juice (super yums)
and the promise of shade and a fan!
This week promises to be a full week with interesting things to do.
Pray for me as I try to do something I have always wanted...
and NO... its not piercing my ears or any part of my body!
Dreamed up by *Dream Weaver* at 2:10:00 AM 0 whispers

Tomorrow is a new day... 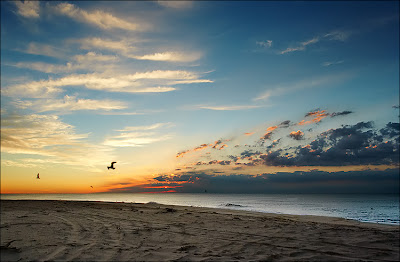 There are moments in life, like right now when I feel a little down about everything in life. For some strange reason... things don't seem... "right". But truth be told, things are pretty good, better than I expected... yet there seems to be some sort of block in my life, something holding me back... So I turned to one thing that always calms my soul... God.
I prayed and I found some solace and then something made me go to my blog and look at this two sites, the sites I used to visit at work after a truly draining day...
Pathways to Peace and The Interview with God
I viewed the presentations and it managed to lighten
my heavy heart somewhat and I am glad.
Tomorrow is a new day...
I look forward to starting it.
Dreamed up by *Dream Weaver* at 2:08:00 AM 0 whispers

I am back from Bang.Kok!
... and my skin is peeling, my legs are aching,
my suitcase needs unpacking, things need to be stowed away,
my room needs cleaning (the mutated dust animals are romping around
my room as if its theirs - the nerve of them!),
my resume needs some glitter and shine,
my assignments for work are piling up,
my proposals have yet to be done, my printer needs new ink,
my toilet needs a brighter light and a dose of clorox, my room needs tidying up,
my arts and crafts need to be tended too, several parcles need to be sent out,
several emails need to be sent as well, need to book my flea market booth
and yes, I need to go on a diet and buy moisturizer!
Yes...
Its back to reality after the holiday!
*grumbles mumbles*
P.S: I need another holiday to recover from this one!
P.P.S: Another post will be up soon with pics and news from my trip.
P.P.P.S: Anyone fancying a cup of coffee or tea or slice of cake (ok maybe no cake since I am supposed to be on a diet) can call me since I am 'self-employed' at the moment.
Dreamed up by *Dream Weaver* at 2:02:00 AM 0 whispers 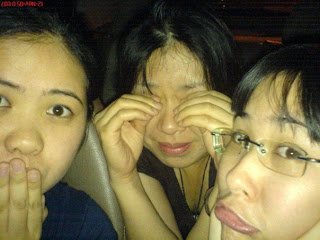 (left to right: Peggy, May Ling and *Dream Weaver*)
JoeMayPeg...
those were the days.
*grin grin*
This photo was taken in 2005, the last time the three of us were together.
I remember so fondly the days in SMKDU when we were in 1 Tanjung and
we would spend days in May and Peg's house before school, listening
to sobby songs (Tommy Page - Paintings In My Mind ~ I totally loved that tape), eating Shakey's Pizza (we loved the chicken and mojos),
laughing and just hanging out.
It was a simpler time then...
We were all so innocent, so naïve.
What happened to those times?
I flipped through my old journals the other day and smiled at the trivial "problems",
the things that seemed to be so important now merely seem a joke.
I reminiscence about those days and feel a wave of longing to
go back in time to try harder to maintain friendships which I have sadly lost,
to take the time to get to know people which I took for granted,
to make the effort to study harder and to do the things I really wanted to
do at that time but never got around to doing.....
But as it is with time... there is no going back
and I still hold strong to my beliefs that everything happens for a reason.
I hope though, that for whatever friendships I lost
or let rust along the way, in time it will mend
and grow into something beautiful again in time.
~*~*~*~
Dreamed up by *Dream Weaver* at 8:58:00 PM 1 whispers

I spent several hours fiddling with it
When I could have read my book or cleaned my room
Or arranged my drawers or slept….

But NOOOO…
Had to go on Facebook and decide to “pimp it up”.
Now I am worried about my pet LaBbit…
If not one pets her or feeds her, will she die?
I also have an unhealthy obsession of getting drinks,
flowers, gift, messages and all that nonsense as well.
My garden seems a little empty,
the bakery has a lone bun and
I worry that my aquarium has not enough undersea creatures!
*GAH GAH*
I can’t believe I am so distraught over this.
I think I need to stay away from Sam and Facebook now!

For those of you who don’t already know, I have left my PR job (it’s been 6 days so far) *dances the wiggles happily! * and am happy about that (if you didn’t already know as well).

I never thought that I would leave my “first REAL job” in less than two years.
Part of me (the ever pessimistic and doom and gloom side of me)
thinks that it’s a dumb mistake and only losers quit…
but the other parts of me, which,
thank God overpower the gloomy side, knows that this is for the best.

So here I am, *Dream Weaver* self-employed
and loving the freedom which I once had those days of long ago (drama-nya!).

Anyways, somehow my last day at work wasn’t great at all which only made me even happier knowing that I did not need to come back to “the hovel” as me and Miss P.Lo calls it. I did not get the standard farewell lunch because people were either sick, on leave or at meetings and that made me feel a little sad to be honest.

The big boss (B.B – know of other words that have the initials B.B?) and my Senior (S…. doesn’t it sound like something else?) also decided to meet up with me at 5.50pm (just when I wanted to leave to see my dad in the hosp) to “talk”. Basically the B.B wanted me to speak to the S and to tell the S why I was upset with her. I roughly told her what I wanted to say but I felt "the talk" was just a waste of time… she was too set in her ways and after all, I was leaving. What did it matter to her?

Anyways, they sorta offered me a job (project basis) but I doubt I will be getting it. They want the new boy to try it out first and then if he can’t do it they might consider asking me to do it instead. Anyways, somehow the conversation came to the part where the S said that the B.B needed to send an email to my clients to inform them that I was leaving.

I then piped up and said that I had already sent an email to my clients and suppliers. This DID NOT GO well with the both of them and the S said “you are not at THAT LEVEL to do that”. I apologized of course (I remembered my manners) and said that it was too bad cos nothing could be done about it since I had already sent the emails. After that “the talk” basically dwindled into nothingness and I left the office for the last time!

By that time, everyone had already left, so there were no “goodbyes” which sucked since there were a few people I call friends in the office. Anyways, I did not know that I was not supposed to email my clients. No one told me that I shouldn’t. all they have ever told me was how to build rapports with your clients so that a strong relationship will form…
and that was what I was doing.

BUGGER! I was quite honestly pissing mad and so ready to finally unload all my thoughts to the S and B.B but because my mind was at UH with my dad, I decided to just keep quiet and I am glad that I did just that. They are so NOT WORTH my time and energy and it was with a happy heart and a wide smile on my face that I threw my two cases of name cards in the bin – it was an interesting trip, one though I will probably not go on again!

Here’s to more wonderful Adventures
and Happy Endings to come!
Dreamed up by *Dream Weaver* at 8:03:00 PM 0 whispers