I have wanted to update my blog for some time but somehow never did quite get around to doing it. I thought I would write a ‘last post aged 25’ and a ‘first post aged 26’ but as you can see that has not materialized!

Well since I missed those two semi-momentous occasions and since I have not yet learnt how to turn back time, I will just leave you with some updates about how life has been for me since the last time I wrote and was feeling un-CNY-ish! 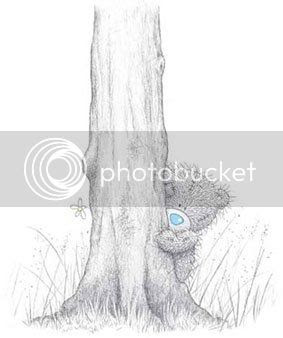 evious years I have always awaited this day with anticipation and much expectation. However, this year, I somehow did not really ‘wish’ for anything but rather let the day unfold for itself which I believe is how I should have approached not only my previous b’day celebrations and other occasions… that way my fragile heart would not have had the opportunity to be crushed.

Now let me take you back a little to me aged 12. When I was 12, I wanted to get married when I was 24 and have my first kid aged 26. I think my 12 year old self would understand that both these slightly delusional ‘goals/aspirations’ will NOT be happening (DUH!). However, it just made me think about where I am at this present time and where I thought I would be when I was 12… and to be honest, I like where I am now instead of where I thought/aspired to be.

So, yes back to my b’day. My celebrations started of with JL bringing me to Michelangelos@Pavillion for some Italian food - which to be honest wasn’t all that great (doubt I will be dining there again anytime soon!) – after work on Friday the 15th. After the not so yummy dinner, we went to C.Club for some drinks and great views of Bintang Walk. Had some pretty decent tiramisu though slightly pricey… but it was worth the view. There was even some fireworks shooting through the sky that night ~ I reckon they knew it was my b’day *smiles*
After work on the last day of my being 25, B and I went for dinner and since we had cravings for MCD’s, we is goes there. This was followed by ice cream
(brownie sundae = Love Potion #31 & Peppermint Chip) ~ Baskin Robbins.
It was yummy ~ thanks B! 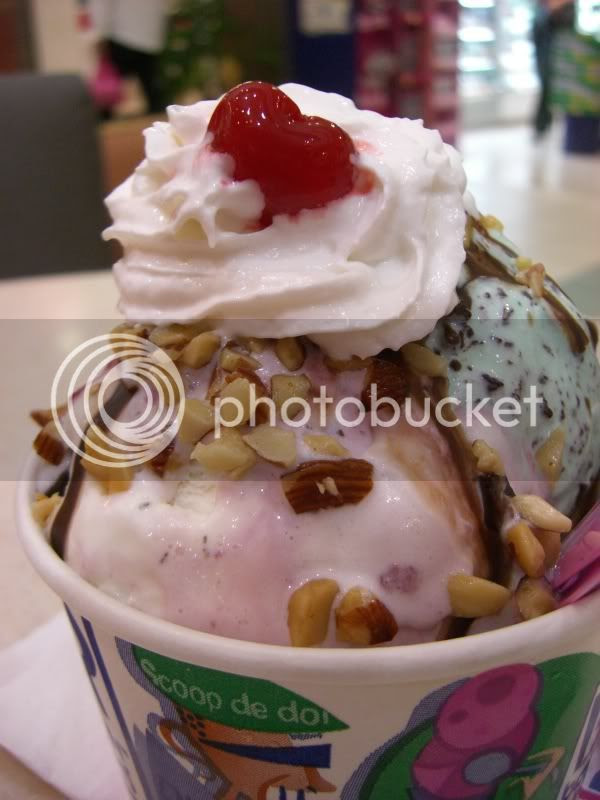 On the 19th itself (my b’day!), I went to work as usual. Had wanted to take leave but had an important branding exercise which got cancelled on the day itself – bummer! Anyways, it was a pretty all right day with no complaints and no idiots calling (which is always great). Had lunch with JL, Dee and Shirley at TGIF and got out of making a silly speech ~ phew!

After lunch, as I got out of the elevator, the receptionist called to me and presented me with the prettiest bouquet I have ever received. It was in pink and purple hues (see gorgeous pics). The bouquet was not from a secret admirer or from Sunshine (Sunshine already got me flowers for Valentines Day which was a wonderful surprise!) but from my boss Chris. She is such a thoughtful person I have to say. 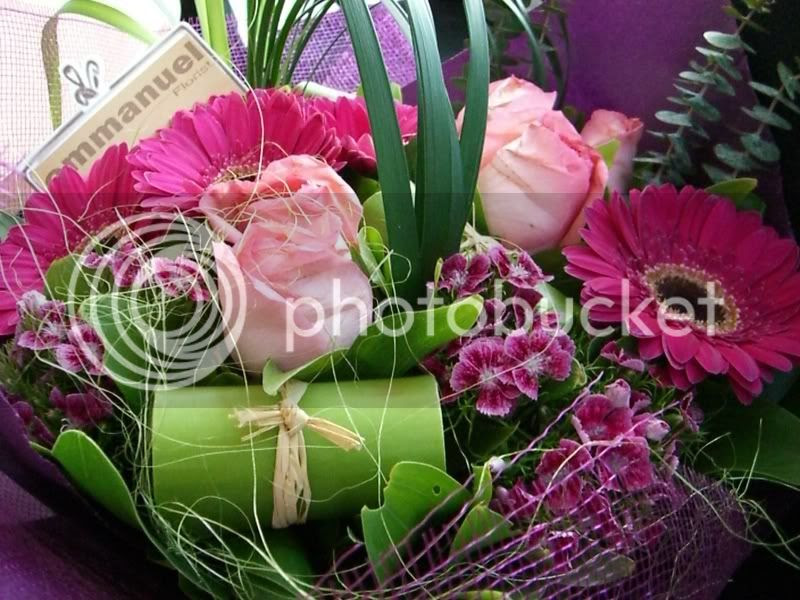 Later in the evening, we had the office party where my office friends gathered round and sang for my colleague and I. We had low fat peach cheese cake (I think it was that), which was pretty delicious. I also received two presents from the office peeps. I got an adorable Hello Kitty cookie jar and a book ‘The Purpose Driven Life’.

I had actually wanted to buy that book yonks ago but never really got down to it until 2 weeks before my birthday. I thought that it was high time that I read it and besides, it was on sale and was the last copy of the book in the shop. And then now for my birthday I receive the same book. I think it is a sign that I should read the book really *smiles*
After work, Sunshine came to pick me up and we went to two places to survey. The first was Marketplace. It looked pretty snazzy but the food didn’t rouse my appetite. The views and ambience was pretty good though and Sunshine and I plan to go there again to just have drinks. The second place we surveyed passed the test, SassoRosso. Its and Italian restaurant and I have to say that I had the best tiramisu ever there. The food was pretty good as well though the escargot could have worked harder for the price we paid. The Long Island Tea never tasted better as well *grin grin* 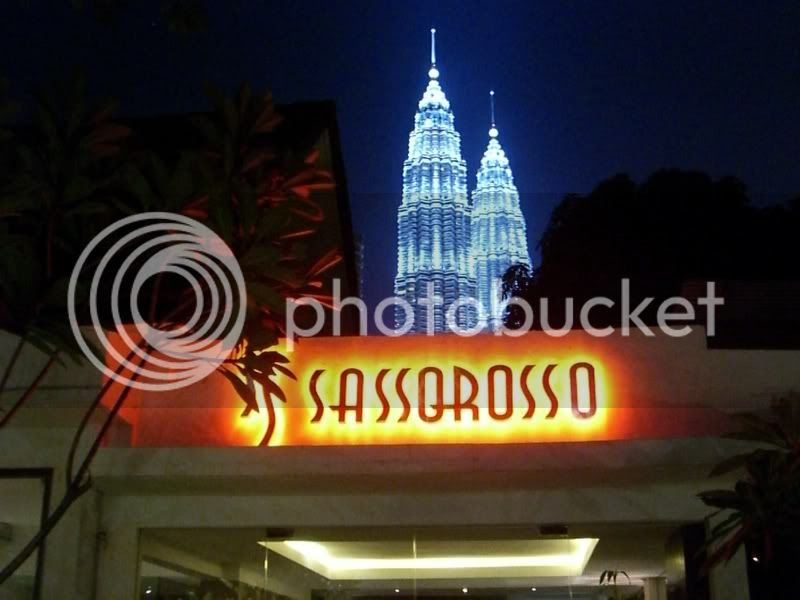 Overall, my birthday was a blast. Perhaps it was because there were no expectations this year… but I was very surprised by the presents I received, the calls (especially from Philip and Gerard – though was unable to reach the phone in time), SMS’s and the Facebook messages ~ thanks everyone from the bottom of my heart!
I also received several lovely presents:
Sunshine ~ A lovely professional looking Parker pen and dinner
My parents ~ Cash and a handy external hard drive which I have been wanting for yonks
Catherine ~ A pretty pretty bag from Nine West
Brother and Pauline ~ A pretty balloon and uber cute tortoise boxers
Brian ~ A gorgeous CNY Barbie doll for my collection
And many many dinners and drinks from several friends *smiles smiles*
So here’s to another fantastic year ahead for me.


My 26th year is going to be filled with only wonderful moments and happy memories. Amen! 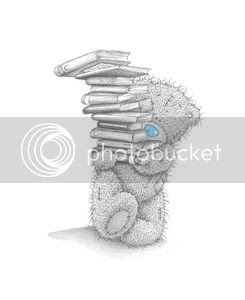 WorkWork has been… crazy? Tiring? Exhausting? Frustrating? Exhilarating? Exciting? Great? Arghhh? Mental? … yup… work has been all that. I recently found out that I might have a new manager. On one hand I am happy about getting a new friend and mentor and on another hand I am worried that just like my old boss, this new person would be a handful (to put it mildly).

My mum also thinks that hiring this new person will jeopardize my chances of being promoted which could be true though I like to think (and opt to think) that my performance will speak for itself. I am leaving this in God’s secure hands and I know that whatever happens, He will be there to catch me or hold my hand and walk beside me.

Have been making new friends, or rather acquaintances in the office. It’s nice to walk around the office and know people for a change. Hopefully in the months to come I will find true friends with whom I can share my ‘real’ thoughts with.

So far, I don’t dread going to work and actually look forward to it. For now I am enjoying things and hope that this feeling lasts *smiles* The only thing that sucks is the time that I don’t have anymore. When I was working in the hovel, I used to have heaps of time to do everything and nothing and now, I don’t have that time anymore. But I am really trying to go home earlier and to be more efficient in what I do. Hopefully I will try to find that much needed balance that everyone talks about but hardly ever gets right. 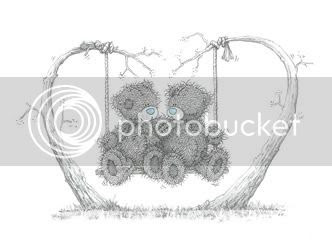 
Now here is a topic that I try to skirt around… to say that my relationship is perfect and A OK would be a lie. To say that it sucks to the maximum is a lie as well… so I guess it is somewhere in between where relationships usually are.

My relationship is pretty okay. There is love and all that jazz still in the picture but there are other problems crowding in making this rosy picture look well, slightly blurry, fuzzy and out of focus. I once thought that this “human and real” problems like finances would never effect me and my little cocoon I had built around my little world but that naïve child in me is gone and I know better.

Both Sunshine and I are trying to work things out but it is hard to find middle ground, a compromise when both people are equally as head strong and stubborn. I am hoping that in time things will work out between us and I for one am really trying to make it work out. For once in my life I see something worth fighting and waiting for… however, for how long I am not quite sure… I guess however cliché it may sound… only time will tell. 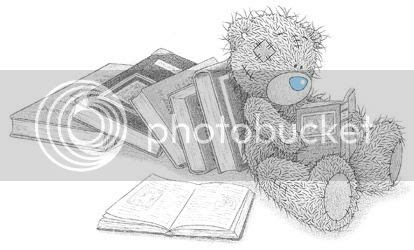 Hobbies
Ahhh my hobbies. How I miss having the time to indulge in them. I remember days prior to my working when I had oodles of time on my hands and how I would make my cards and write letters to all my Aussie friends. As you must have guessed, these days are long gone replaced instead with a frantic weekends trying my best to fit everything into two days.

Then there are my books. I have been on book shopping binges and have bought heaps of books, which of course I have not read. The problem I am now facing is where I am going to store the books. The current bookcase I have is already stuffed to the brim with books and it’s a shame that all of them can’t fit together.

Am thinking of converting the spare room downstairs into a library or study of sorts but that would cost $$$ and am currently saving for my ‘grand trip’.
Just got several new books (bought and rented) and of course am super happy and delighted about them *smiles smiles*

Have been working with the scrapbooking shop and that is really great as I get to be near arts and crafts stuff when I work ~ sweet! I also have been offered to write for my ex client and hopefully that works out well. The only thing now would be to be disciplined and to sacrifice a whole chunk of my free time doing this. Oh well… no one said life was going to be easy.

Well I think I have written enough for 16 minutes of reading.
Hope you enjoyed the update and


hopefully I will be writing more regularly…. Hehehe… hopefully! 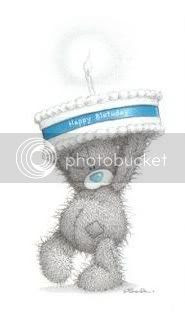