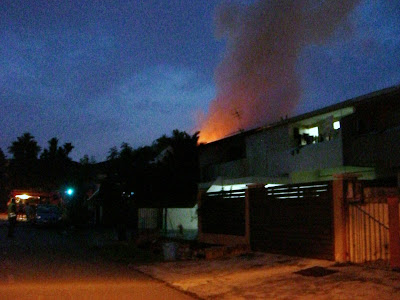 Thick clouds of smoke with specks of what seemed like iridescent orange flecks greeted me when I stepped out of my home. The acrid smell of something burning hit me next.

It was about 6am when I joined my other neighbours on the street. The fire had apparently started just ten minutes ago. Neighbours I had not even seen before, but had only caught glimpses of, were huddled d in groups talking and no doubtly praying that it was not their home that was in this dire condition.

A lone fire brigade was trying to ease the flames that seemed to be spreading. Already two houses were on fire. Flames licked the roofs and poured out from windows. The police were also milling around trying to get statements and answer queries. I felt strange. I felt that I was on a set of a movie or TV show rather than in my rather quiet and peaceful Damansara neighbourhood.

I heard snippets from my neighbours as they began to recount how the fire began. Some gave their two cents about what should have been done. Complaints poured forth as well concerning certain parties that were inefficient. The fire of this magnitude should have prompted another fire brigade to come they said.

About more than half an hour later, a second fire brigade arrived and house number three had already started to burn. Tempers flared while the flames were put to rest. Why did the second fire brigade number arrive so late? Why were the authorities so laid back and unconcerned? Why did the firemen take so long to even get the hose out? Questions abounded, yet were left unanswered.

I was standing alone. The air was thankfully still with only the slightest breeze. I was suddenly hit by a sadness, which I don’t quite know how to explain. Thoughts raced through my mind. How could this happen here, in my neighbourhood? How must the owners of the home feel now that they had lost their homes? What would I have done if this had happened closer to my home? Could more have been done to help contain the fire?

An hour had passed since I had arisen and in that span of time, the lives of three families had changed. When I reached home, I crawled back into the safe confines of my bed but could not sleep. I thought most about the fragility of things, about the unpredictability of fate, about the untameable elements of nature.

My mind remembered the numerous catastrophes faced all over the world. The tragic heartbreak of lost, of death, of senseless wars, murders, rape and kidnappings and I felt an overwhelming sadness followed by the feeling of powerless. I felt scared too.

Good grades, degrees and a good job do not protect you from these unforeseeable things I realised. The amount of money you have in the bank, or the sort of bag you carry, the clothes you wear or the type of car you drive doesn’t exclude you from these tragedies in life.

I tossed and turned in bed and I prayed. I prayed for the families that had lost their homes and most importantly for their lost memories. I realised also how truly blessed I was that I had a wonderful family, a roof over my head and clothes on my back, food on my table and so much more. I had to right to complain about not having enough… I had more than so many others.

Life in my neighbourhood continued soon after. People walked around the park, went to church, went for breakfast, went to the market. Life was back to normal for most of us. How easily we forget. How fast we move on, worrying once more about the minute things in life like what we would eat for breakfast.

I take this moment however, to say a little prayer for the people who have been hit by tragedies. I pray for those whose hearts are restless, whose lives are for now, incomplete. I pray that they find peace and solace in their lives again. I pray for Angels amongst them to help them in their times of need. I pray that they will be able to rebuild their lives again. I hope to live each day now, knowing how blessed I truly am.
Dreamed up by *Dream Weaver* at 10:05:00 AM

I am so sorry for what had happened. And I understand what you mean, it takes things like this to realise, that we are also 'Someone else' to someone else.

Well, heard about your new job, good luck, aight? You are going to be just fine. *smile & hugs*

hi (:
Thank for the really nice and sweet comment left over at my blog.
You're a scrapper too? (:

and yes, we are truly Blessed :)

I do agree that having lots does not protect one from all the security issues in this country. That is a shame. Why did it take the 2nd fire engine to appear? Well, it is just how complacent the law makers and civil servants are in Malaysia. It is part of out lives that we would sadly have to live with.

Hey Dream Weaver, been reading your blog. You buy SB supplies, read SB blogs, obviously SB then? Can we see some layouts? Thanks.